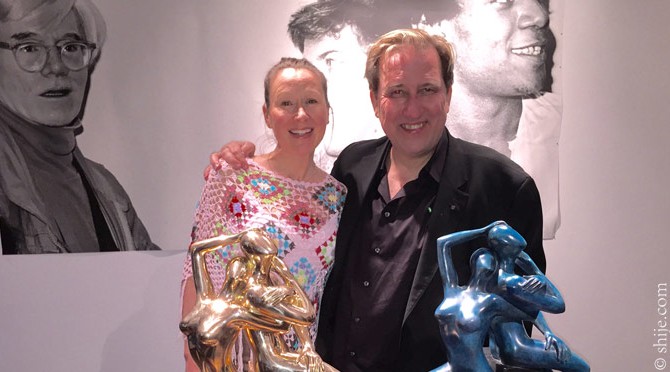 Shije:  A giant ‘Kostabified’ guitar greets people at the entrance to The Cutting Room. What a beauty. I think I stared at it for half an hour. How did it come about? 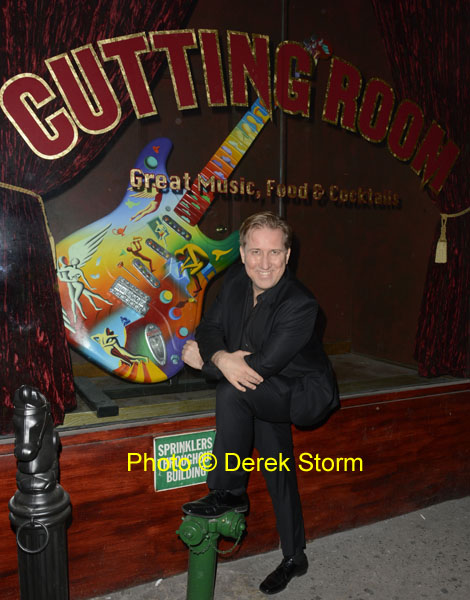 Mark Kostabi:  Adam Sands, a concert booker and party/event promoter in New York asked me to do it. I agreed and along with showing many paintings within the Cutting Room, I feel like I’ve become part of the family there.

S:  Lots of musical instruments in your paintings! Which came first for you art or the music?

S:  Should we hear your paintings, are we supposed to imagine sounds? In music there is such an interplay, the language of music, spoken between the musicians on stage… in your visual artform do you ever riff back and forth with other artists, and if so, how long does it take to get a ping back?

MK:  I do feel art and music are very related. Both have colors and harmony. I’ve done many collaborations with other visual artists and we riffed back and forth: Enrico Baj, Tadanoori Yokoo, Howard Finster, Arman, Paul Kostabi and Tony Esposito. Sometimes the ping happens immediately. Other times it takes a while.

S:  At your exhibit at the Dillon Gallery in Chelsea, bass player Paul Nowinski told me you are from Estonia! That’s fascinating. Is there a link online where I can learn more about your family during this exciting time in history? Do you speak Estonian?

MK:  I was born in Los Angeles to Estonian immigrants. I understand a lot of Estonian but speak only a little. People have said that my visual art relates to some historical Estonian artists. The Estonian art critic, Heie Treier, could elaborate better on this. I feel very connected to the Estonian music scene.

I’m interviewing Mark Kostabi, especially exploring his roots. May I please include a statement from you about his visual art? If you name other Estonian artists, I can link their wikipedia pages, so the readers will know what you mean and can explore the other artists in more depth.

I wrote about the Estonian connection in the catalogue of Mark Kostabi’s exhibition in Tallinn in 1998. The catalogue is printed, the text is not available in the internet. I have thought about the topic a lot.
Perhaps similar kind of metaphysical painting is strongly present in the Estonian painting of the cold war period (Soviet period), in the 1970s-80s. Kind of mystical, resembling de Chirico – Wikipedia. For example Mari Kurismaa, Andres Tolts; architect Vilen Künnapu promoted this kind of art in his texts. It also occured in graphic art.  See Ando Keskküla – Animation on YouTube!
It’s a long story.
Best,
Heie

S:  Is there a real life muse behind the faceless female? 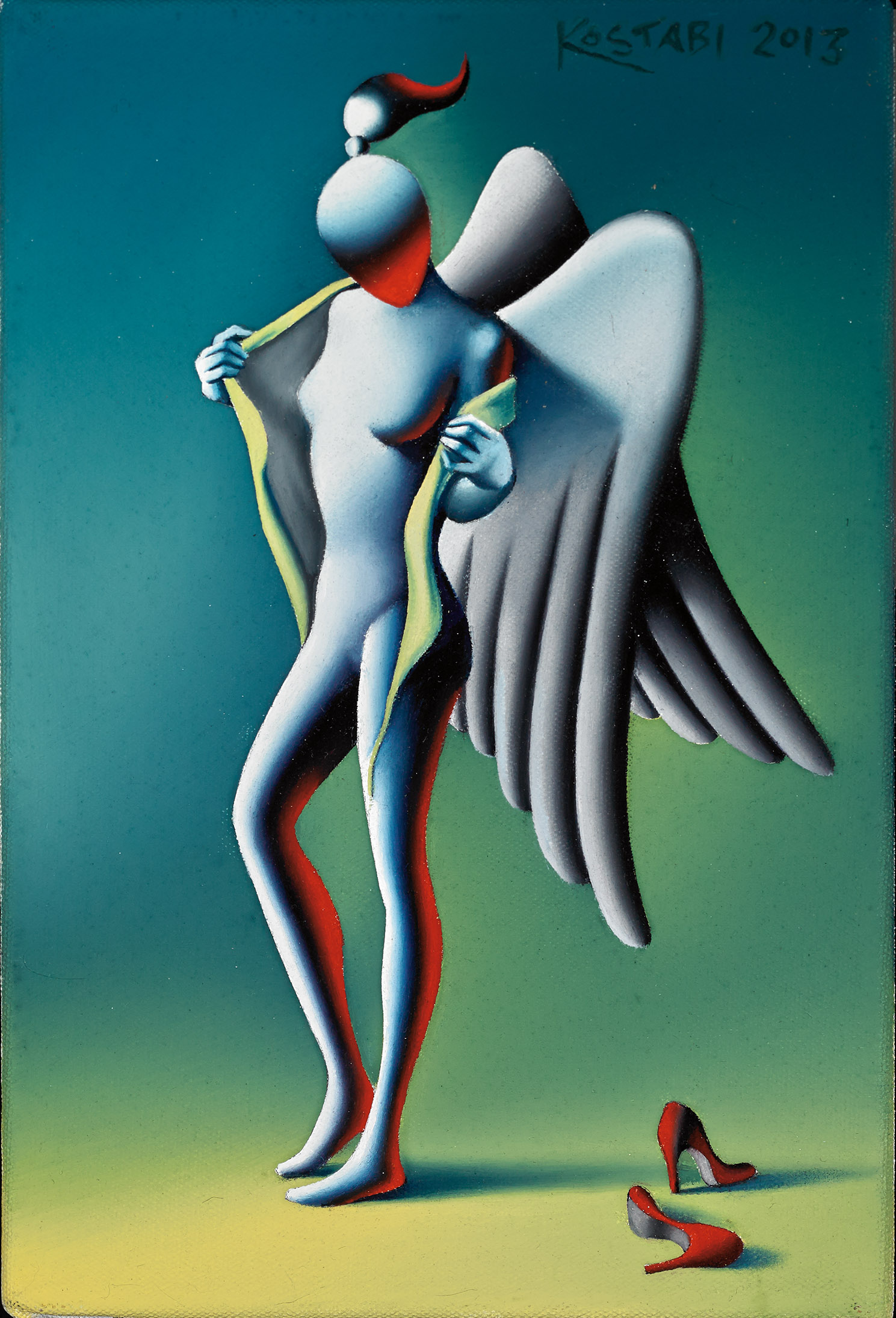 MK:  Basically I just like seeing girls with ponytails. Especially high ponytails. I think it’s so cute and sexy. The great painter and influential art critic, Walter Robinson, said all the girls with ponytails in my paintings are Heidi Follin, who is the long time girlfriend of my brother Indrek Paul Kostabi. But now my girlfriend, who is Estonian: Greesi Desiree Langovits, often wears ponytails that look exactly like the Kostabi painting ponytails. She even creates the round ponytail “tie” with her hair. It’s so cute. We call them Kostabi Tails.

S:  If there were a rosetta stone, you know, a legend to the map, a decoder ring for your symbols, which of your artworks would it be? 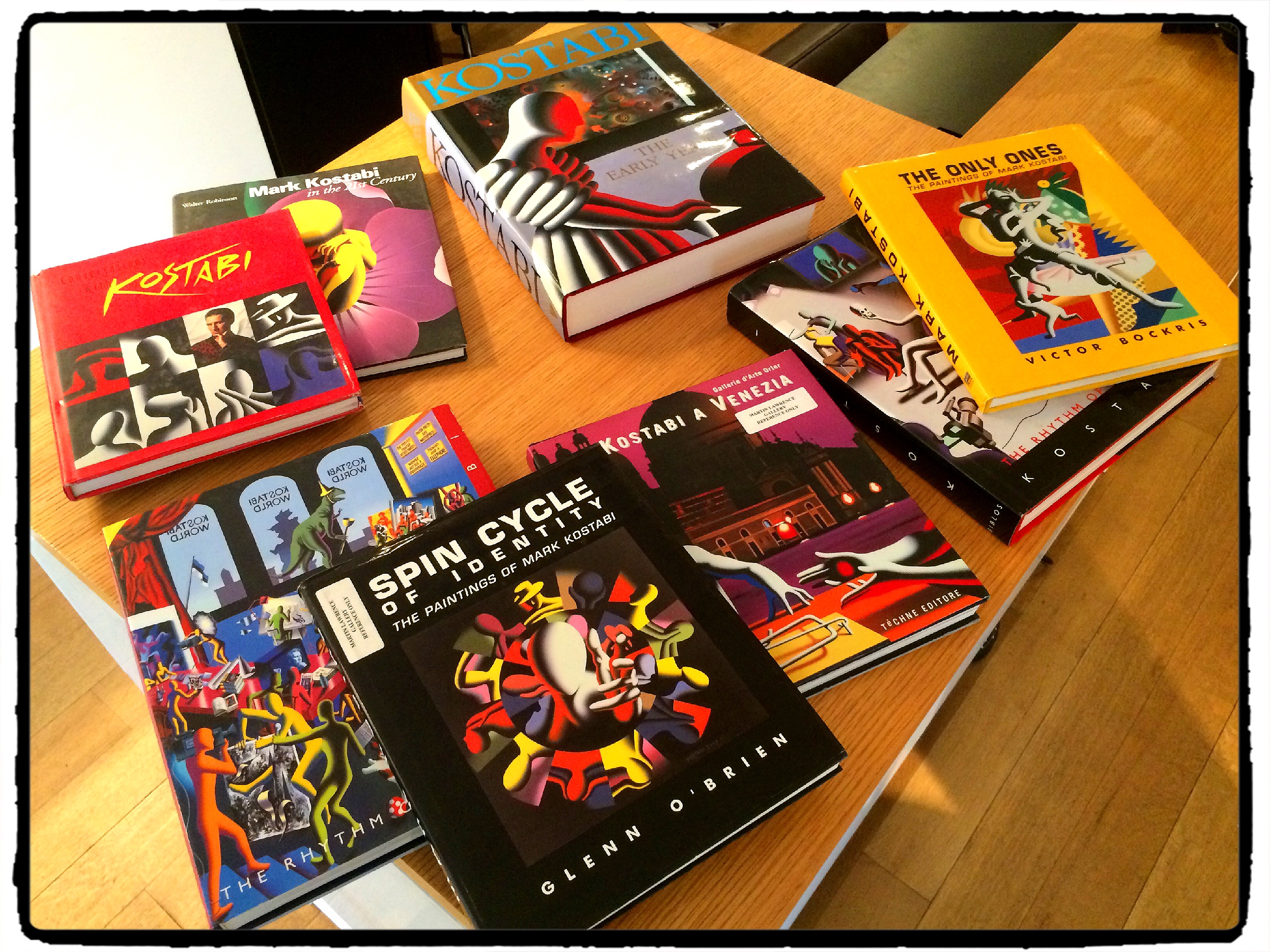 MK: You’ve just given me an idea for a new book. Thanks. It doesn’t exist yet but a painting that may come close is The Rhythm of Inspiration, a very large and detailed painting that was in my 1998 Tallinn retrospective (which was curated by Heie Treier) and for many years was displayed within the Estonia Concert Hall in Tallinn.

I’ve done over 30 books so I don’t know which is the most likely to contain a decoder ring, but Conversations With Kostabi comes to mind as a strong possibility.

S:  Mark, I like your painting Climate Control, the world out of control, but soothed by the familiar shape and shading of the ponytail lady and familiar symbols.  Tell me a secret about the symbols that nobody else knows! Example, what’s with the witchy hat?

MK:  The relevance of the pointed hat depends on the context of the rest of the painting. It could be for witches, parties, dunces or an antenna for wisdom.

S:  Is Misguided Perfection set in Italy? I like the depth of the shadows in it, and that it looks like three women holding up the sun! Strong women! Can you tell me more secrets about all the significant symbols in the painting?

MK:  If you asked a prolific film maker, like Woody Allen for example, about things within any of his movies and you cited the title of the film, I imagine he would know which film you were talking about. But I have made over 20,000 paintings and I don’t remember all the titles. I must say however, I like the title: Misguided Perfection. One word of that title could describe my brain.

S:  Until the event at Martin Lawrence Gallery, I thought of you as a painter. I think because of CD covers you’ve made for The Ramones, and Guns N’ Roses. So to find out you sculpt — the two sculptures were a beautiful surprise. 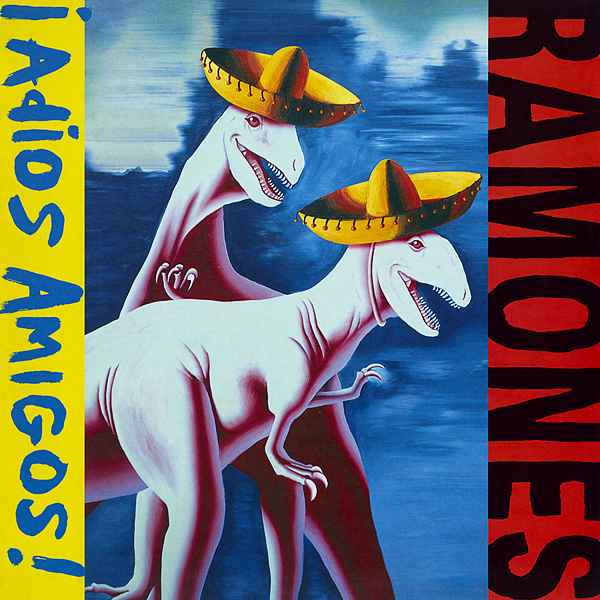 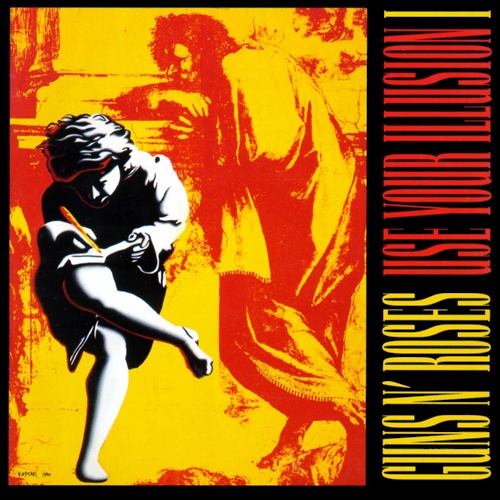 MK:  Thanks. I pointed at you like a rockstar.

S:  You’re the rockstar! Such a fun evening. More than once I was asked if I modeled for any of these. 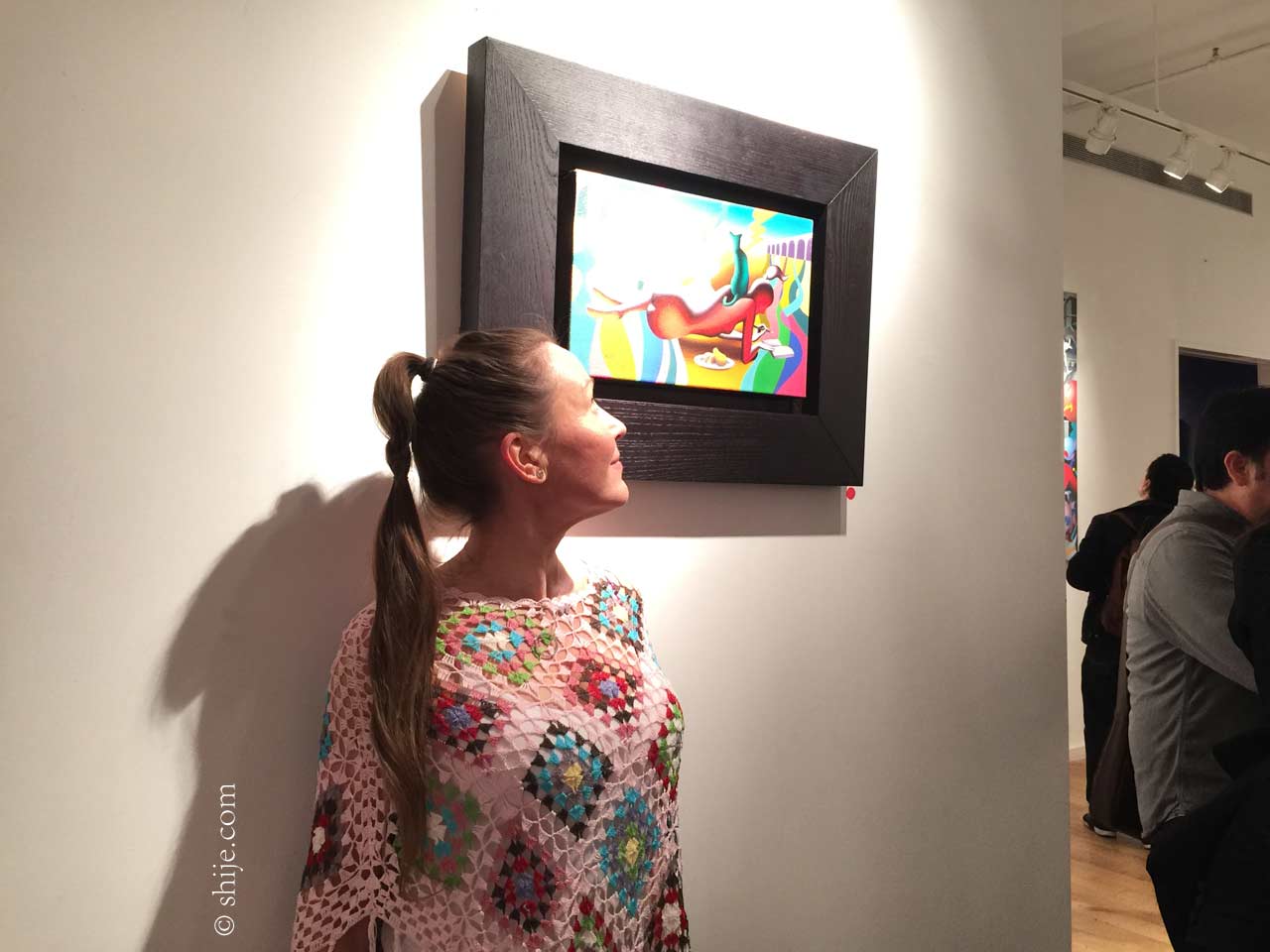 MK: What did you say?